Waiting For The Warmup

Home» The Field Report » Waiting For The Warmup 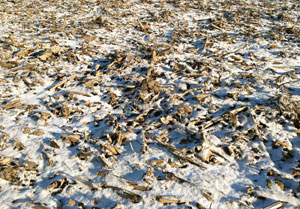 Trent is resigned to slow waiting for the soil to dry out and warm up.

The frost depth was 8 inches as recently as February 25 and is now about two inches. This persistent frost depth has inhibited the movement of water in the soil. Enough water has penetrated to raise the subsoil moisture to “abnormally dry” from the “moderate drouth” rating that was in place for many months. Unfortunately, the frost from the fourth-coldest winter in Illinois history has kept most of the recent heavy rain and snowmelt in the upper few inches of soil, which are now too muddy to till.

Trent has been doing chores like picking up rocks, because it is too cold at night, and too wet, to plant. Trent is hoping to begin planting right after Easter, April 20, but could be forced to wait until May 1 for the soil temperature to reach 50 degrees. That temperature is needed for fast germination and a vigorous start for the young corn plants.

Trent has fall-applied most of his fertilizer, so he will be “going a little heavy on corn” although soybeans are a little more profitable in today’s market. But the fertilizer is already in the ground, so he will follow his existing plan. Recent ag industry issues about who owns the data from a particular farm field are not an issue for Trent. “If I don’t give my data to my fertilizer guy, what good does it do me?” Trent remarked.