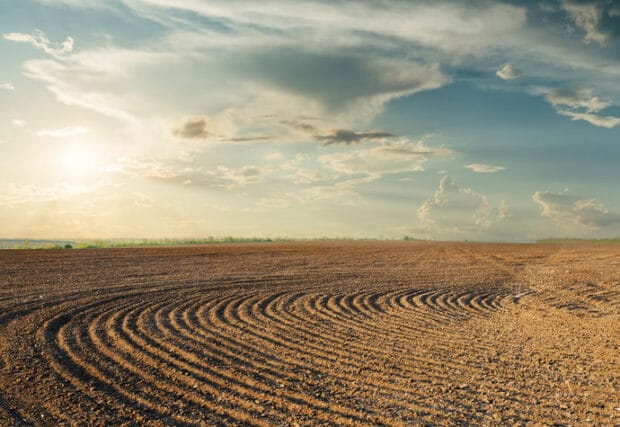 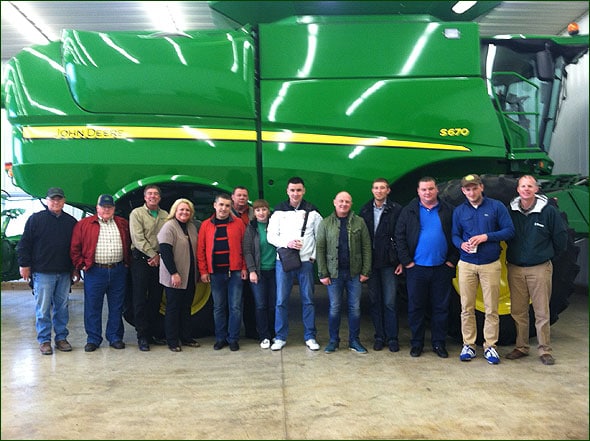 On a cool rainy day in late May 2014, Trent and Jenny Brandenburg hosted a group of private-sector Ukrainian agribusiness leaders on a tour of Brandenburg Farms.  The Ukrainians were touring areas of the Midwest Corn Belt as owners, directors, and chief engineers of sizable farm management companies, comparing and contrasting U.S. farming practices and production with the expanding private agribusiness industry in Ukraine.

Black dirt and fertile soil typify many of Ukraine’s agricultural areas, much like the rich prairie loam of central Illinois.  These natural attributes create huge potential for Ukrainian agriculture, which is in a period of recovery after Ukrainian independence following the collapse of the former Soviet Union, as well as a period of severe inflation, devaluation of Ukrainian currency, and the reorganization and transition of its land ownership structure.

From Small Parcels to Mega Farms

Less than a decade ago, agricultural enterprises in Ukraine were mainly small parcels of land belonging to individual farming families who typically farmed 2 to 5 hectares [approximately 5 – 13 acres] using small-scale traditional methods.   Today, much of Ukraine’s rich farmland is in mega farms operated by agricultural management companies that lease thousands of small parcels of land from local farmers and apply technology and economy of scale practices that are typically found in the United States and Brazil.

One of those companies is the Genero Group, based in Donesk, one of the disputed regions in southeastern Ukraine where pro-Ukrainian and pro-Russian separatists battle for control.  Yurij Yanchenko, CEO of Genero Group, and one of the tour guests at Brandenburg Farms, discussed how the infrastructure and political instability of today’s Ukraine increases market risks, creating the necessity of “field to over-the-scale” without the luxury of storage or long-term marketing strategy.

Rather than the predominant corn and soybean commodities found in Illinois, Ukrainian agribusiness companies such as Genero Group are diversified with wheat, corn, sunflower, soy beans, sorghum, and chick peas as commodity crops.  In addition, they raise livestock including dairy and organic beef, along with field and greenhouse food crops such as carrots, tomatoes, and cabbage for direct human consumption.   Ukrainian law maintains strict bans on GMO [genetically modified organisms] crops, imports and exports.

The Brandenburgs’ Ukrainian guests enjoyed souvenirs of the farm along with refreshments during a presentation by Trent, who provided them with information about his farming operation and equipment, along with Illinois grain farming practices including field applications, planting, harvesting, crop yields and approaches to marketing and storage. Trent answered questions about cash rents, the landowner and producer relationship in central Illinois, farmer-owned grain elevators, direct delivery of commodities to ADM in Decatur, Illinois, [just 15 miles away], and on-farm grain storage.  Craig Wynne, store manager of of Sloan Implement John Deere Dealer in Atwood, Illinois, answered questions about agricultural equipment use and acquisition, leasing, and replacement in central Illinois.