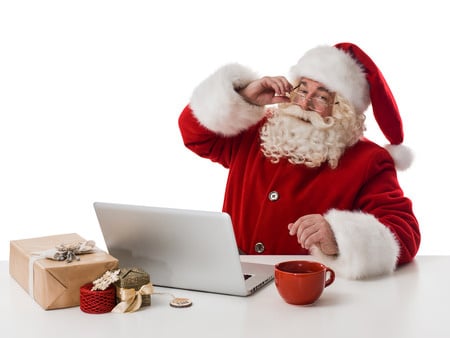 Santa looks over the past year of production.

Trent recalled a lot of extra work in replanting after the ponding from the May rains. “The April-planted beans did great,” he happily noted. Overall, Trent’s soybeans did better than expected, because the late harvest of the replanted beans left more time for pod fill.

Trent was also pleasantly surprised with the quality and yield of his corn crop. Forced by seemingly endless rains to plant much of it later than he wanted, the rest of the growing season and the vastly-improved genetics of current varieties, gave Trent a respectable, if not bumper, yield. Another plus feature was the unusually dry August and early September, enabling the corn to dry for storage in the field, rather than having to pay the elevator. “Now, if we could just do something about (market) prices,” Trent concluded.

Trent and his family wish you and yours a Merry Christmas and a Happy, Prosperous New Year.